Everybody's citing the parallels between what Bush and his Swift Boat Nitwits are doing to Kerry now, to what he did to McCain in 2000. This line of the transcript of the 'you should be ashamed' debates got me:

MCCAIN: But you're putting out stuff that is unbelievable, George [Bush], and it's got to stop.

BUSH: I'm going to stand by what I'm putting on TV. And what I put on TV was looking in that camera and saying, You can disagree with me on issues, John, but do not question -- do not question my trustworthiness and do not compare me to Bill Clinton. [my emphasis]

Looking back with hindsight, that's exactly what he and his minions got the country to do, not question his trustworthiness. We're paying for it now.

And if you don't feel like searching for the 'ashamed' exchange, here it is:

MCCAIN: No, here in South Carolina. You've seen it -- turn on the radio, turn on the television, and unfortunately now pick up the telephone and you'll hear a negative attack against John McCain.

But let me tell you what really went over the line. Governor Bush had an event, and he paid of it, and standing -- and stood next to a spokesman for a fringe veterans' group. That fringe veteran said that John McCain had abandoned the veterans.

And so five United States senators, Vietnam veterans, heroes, some of them really incredible heroes, wrote George a letter and said, Apologize, you should be ashamed...

By the way, John Kerry was one of those 5 senators.

BUSH: Let me speak to that.

MCCAIN: You should be ashamed. Now if you want...

[CNN's Larry]KING: Is he responsible for what someone else says?

MCCAIN: Well, this same man -- he stood next to him, it was his event. This same man had attacked his father viciously.

MCCAIN: So I'd be glad to tell you the rest of the story, if you'd let me, when it's appropriate.

KING: Well, let him respond on that point.

John, I believe that you served our country nobly. And I've said it over and over again. That man wasn't speaking for me. He may have a dispute with you...

MCCAIN: He was at your event.

MCCAIN: He's listed as your (inaudible)

KING: All right, let him finish.

BUSH: The man was not speaking for me. If you want to know my opinion about you, John, you served our country admirably and strongly, and I'm proud of your record, just like you are.

And I don't appreciate what he said about my dad, either. But let me say something, if you're going to be -- hold me responsible for what people for me say, I'm going to do the same for you. And let me give you one example.

MCCAIN: George, he's entitled to his opinion on that issue.

BUSH: Well, so is this man.

MCCAIN: You paid for an event...

BUSH: So is this man.

MCCAIN: You paid for your...

MCCAIN: You paid for an event...

MCCAIN: You paid for an event and stood next to a person. And when you were asked if you would repudiate him, you said, no.

So, four years later and nothing's changed. My thing is, what in Hell happened to McCain in the last 4 years. Jesus H. Christ, he and Bush were almost doing an 'Al and Tipper' the other day. 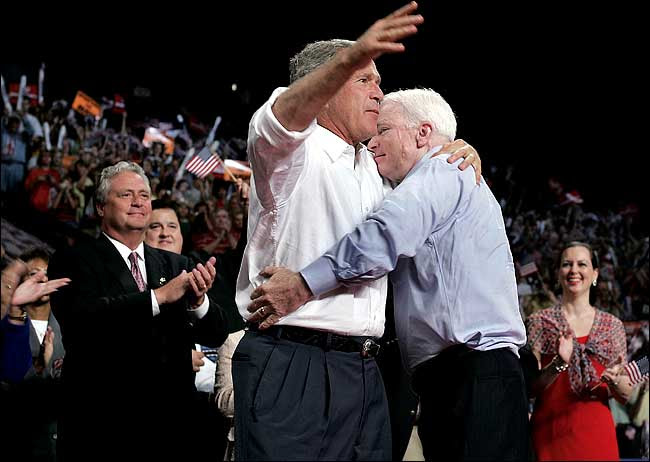 Makes ya wanna puke, don't it?

Posted by Fixer at 06:30
Email ThisBlogThis!Share to TwitterShare to FacebookShare to Pinterest